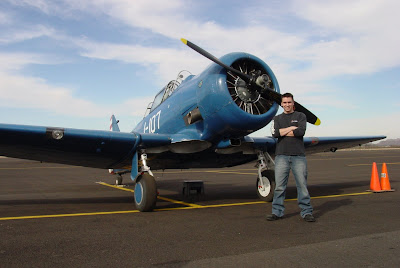 This was one happy time for Dan.
He just met his first milestone goal.
As a gift from his parents, Dan had the thrill of flying in the World War II
WARBIRD plane. He and the instructor went up and did fighter maneuvers along with some acrobatics. The instructor even let
Dan take over the controls for a few minutes. This gift was for Dan's obtaining his first milestone of getting his AA Degree in Animation. Dan felt he was on his way and was at the half way point toward his BFA Degree in Computer Animation. Shortly after this period Dan's life changed dramatically.

While leaving the Taco Bell after having lunch, a big SUV van came accelerating out of a parking lot and hit Dan's car in the right front section of his 1971 Chevy Nova. Dan ended up in the hospital for sometime with head injuries. The sad thing about this incident was that Dan had been so excited about his schooling and that he was past the mid point of his education. Dan was out of schooling for three months, so that meant he could not graduate with his class. Because of the accident, Dan's prized Chevy Nova was totaled! He and a friend had worked over a year rebuilding on that car. It was Dan's first car, a beautiful classic. All of this caused to Dan became very depressed. At this point, Dan was seriously thinking about dropping out of college altogether. But, his desire and love of art and his chosen occupation field was paramount, so he decided to transfer to the Academy of Art University in San Francisco. There he found a second home had many good friends and was doing well in his schooling. He told his parents that his move to San Francisco was one of his best choices and his dream goal was VERY close.

With Daniel's Scholarship Program, I know Dan would be very proud to be helping other students obtain their dream! Dan's website is going to be updated with a new Newsletter about what is happening in the arts field. And, this is a way to communicate with Dan's friends and website visitors. So, please come back to visit from time to time.

A beautiful quote "THE LENGTH OF OUR LIFE IS LESS IMPORTANT THAN ITS DEPTH,"
by Mary Fisher.

All size contributions are welcome and will help in assuring Daniel's legacy.
Posted by dans Inspiration at 2:42 PM

View my complete profile
Please visit my website at www.dansinspiration.com