"Daniel's Dream" is now released, So far the feed back has been positive. The one common suggestion
is to "Target " Art students, Art teachers, and other serious admirers of the Art & Artist !
The promotion for "Daniel's Dream " is by word of mouth and has NO specific target. Yes I agree
that people that love the Art World will find the book very interesting, but as Daniel's father I
really wish the general reader would read "Daniel's Dream". Some thing that is very hurtful to Daniel's Mother and I is that he is being referred to as " The student who was murdered in Oakland".
That is the main reason for "Daniel's Dream" is to let the world know the "Real" Daniel" and many
of the feed back has been the surprise the reader has had to learn about Daniel. I get told over and
over that it doesn't matter what other people "think" it's what I think is most important. But
it hurts very much to know Daniel and his challenges and hard work and dedication to hear,
"Daniel the student who was murdered in Oakland", as anyone who reads the book can understand. One important FACT the money from the sale of "Daniel's Dream" is going to
Daniels DRL Art Education program. Daniels DRL Art program is very successful in it's Mission
to strengthen Art Education. But with the economy the way it is ,donations are slower! So the
funds of Daniel's Dream hopefully will let the reader receive something and the DRL receive also. And even allow Daniel's Dream to become stronger. 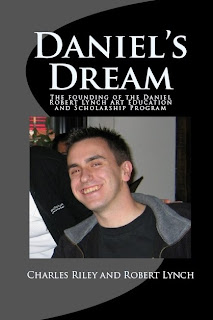 This is the book cover for "Daniel's Dream." You may purchase it on the website www.danielsdream.webs.com. It's also available at libraries, Amazon and other fine book stores. It's worth the read! For you who are reading this with young children, the one thing that you'll learn from this book is that if your child has a passion for something, they can achieve it with dedication. The one thing that amazed me about Daniel was when he said he wanted to be an artist! Yes, he loved to draw, but the talent just wasn't obvious that he had what was needed. All during his years, he struggled with showing the talent. But his love for art
was unbelievable. With a passion and dedication that was unbelievable he became talented, natural NO, but through hard work and dedication seldom found at this age. Another thing I learned from Daniel was that "YOU CAN DO IT" but you just can't wish it, you have to earn it. The person who impressed Daniel so much that made art was his "DREAM" was Mr. Al
Agnew. Al impressed in Daniel that art took hard work and practice. He wrote on the back of the picture that Dan had purchased that art was just like sports such as basketball to be good at it, you have to practice. Dan took that to heart and "practiced" beyond what I could understand. Yes, he was becoming an above average artist. So when your child or children have a desire or love, maybe you can't see it, but if they work for it they will get it! Easy NO . It can be done. Daniel was living proof of that. I think you'll see that after reading his book. The DRL Art Program is helping other students pursue their dream in the field of art education. I know Daniel would be so proud! Please pass along to your friends about "Daniel's Dream. "
Posted by dans Inspiration at 5:44 PM 1 comment: