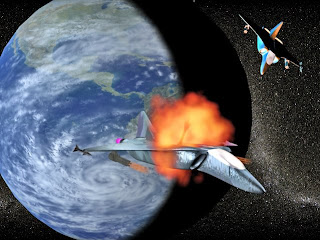 This is a computer-generated picture done by
Daniel, we have this as our screen saver and it's awesome! I know that the subjects I write about on this blog are about things that I'm concerned and interested in, and many of you may not find these subjects interesting! But at least this is an outlet and a way to express my feelings.
Today the Supreme Court made a ruling about
"Gun Control." I've always been in favor of the
folks being able to have a gun if they wanted one. After Daniel was shot and killed by a hand
gun, I have very conflicting thoughts about the
right for the citizen to own a gun. Along with
that "Right" comes "Responsibility." The argument for the Right to Bear Arms is for personal protection, hunting, etc. and I'm all for that, but they tell us that being able to drive a car is not a right but a privilege. So to have that privilege we must pass a drivers test and obtain a license. But to have the privilege to own a gun, you go out and buy one and use it, unless you intend on concealing it, then you need a permit. The person that shot and killed Daniel had a prior conviction of having an unregistered gun. But he got another one and took Daniel's life. Daniel was killed in 2006. There were 15,000 + homicides in the United States. We, as a society, cannot be so insensitive to accept all these murders as acceptable. It's going to get much worse before it'll ever get better. 15,000 lives are gone, but we must have the "Right to have a Gun?" To have this privilege we must also use
"responsibility" of gun ownership. This problem is not going away, but we, the citizen, can demand corrective action, otherwise, society will just keep going the way it is. Just think how many precious lives have been lost!

Thank you for letting me spill my gut on this subject. I can see no solution until the masses get mad and demand action. Many of you I'm sure have differing thoughts on this subject and I'd welcome a dialog on the subject! Many of our cities are "out of control." Jjust last weekend in Oakland, California, they had 7 homicides! In 2006, Oakland had 148 killings and 2008 looks worse at this point! That's one city in the U.S. If it was a baseball team or a corporation, the manager would be fired and and a new manager and coach would be hired and corrections would be mandated. But we just keep the management team in Oakland and instead of losing ball games were losing lives! Life is so precious, whole families are destroyed. But we, the citizen, have the "Right " to have a gun! Yes, I should have the right to have a gun because I'll be responsible, the other guy won't. S hould we both have this right? And what about Daniel's right to pursue life, liberty, and happiness! Let me know your thoughts on the subject, I'm very interested in your opinion...
Posted by dans Inspiration at 8:47 PM No comments:

It's been awhile again in making an entry into this Blog..... I would like to alert all readers
to a silent happening in our schools which is happening "under the radar." It concerns ART.
Our schools have been given the edict to strengthen math and science education, we are way behind other world countries in math and science. School budgets are strained to there limits,
so Art budgets are being cut in many schools. It's not only art, but many other minor subjects are being cut or eliminated. We all know that we need to improve our core subjects, i.e. math and science, but not at the expense of ART. If we allow art to become a casuality and fall behind the curve in our education, we, as a nation and society will pay dearly in future generations. Many people and maybe you think "big deal, so our kids will miss painting some pictures." Art education is way more important than "just painting some pictures." Studies show that art education enhances the development of the part of the brain that strengthens the capability to reason, be innovative, be creative, to do critical thinking and "out of the box" concepts. It will have an extremely negative impact on future generations if de-emphasis on art continues. Art development is greatly needed by today's students. Become involved if your child's school is or has downgraded or eliminated art education! Stand up and alert other parents, DON'T allow the school board and administrators downgrade or eliminate art from the school curriculum. It's a stealth problem and society won't realize what happened until it's too late.

I would like some feedback if this is happening in your schools and if you have taken action to correct this problem.
Posted by dans Inspiration at 7:52 PM No comments:

Labels: Potential problem in our schools 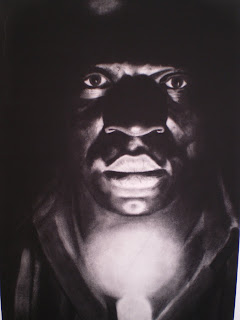 This is a picture of the "Magnificent Blackman" that Daniel drew. It was honored with special recognition in a gallery showing. Daniel was very proud of this drawing and it shows
his talent was becoming stronger, as was his love for the arts.

The Daniel Robert Lynch Art Education Program is up and running. We have a strong dedicated art committee that has
just selected and awarded the first annual Daniel Robert
Lynch Art Scholarships. Because of the quality of the applicants, the committee awarded two (2) scholarships.

Emily Wilson,was one of the winners, Emily has committed herself to the arts and is planning to make it her career. Her
academics and work ethics are outstanding, her portfolio
was exceptional. Emily will be successful in her life's venture.

Haley Glenn, was the second winner. She has a strong
life foundation that guarantees her a very successful future.
Some of the things we read about today's youth, gives us pause for the future of this country. After reviewing Haley's application and all the other applications for scholarships and reading about their journey to this point, we, as a country, don't have a thing to worry about.

All we read and hear is the negative regarding our youth. However, the vast majority we never hear about would put a pride in our hearts. The vast majority of our young people are living their lives in a manner that would make all of us proud. We are very proud of Haley and Emily and will be following their successful careers.
Posted by dans Inspiration at 8:40 AM 2 comments:

Hope the new year finds everyone well and happy. Ran across a cute vignette the other day and would like to share it with you. We plan for tomorrow and reminisce yesterday and complain about our lives at the present. We're never satisfied.! Maybe this little story will put your life in perspective..I hope it can...
Two men, both seriously ill, both occupied the same hospital room. One man had a bed by the window and could sit up and look out, being confined in his room for a very long time he looked forward to being able to look out side and view the beautiful park below and all the children playing and the couples walking along enjoying themselves.
The other gentlemen in the bed without a window so loved it when his partner would
describe the goings on the activities and the beautiful landscape of the park. Actually that was
his only thing to look forward to. Day after day the gentleman by the window described the sighs and sounds to his bed ridden friend for he know how much this experience meant to him. When they see young lovers walking along it would bring back memories of their own youth. Even though the one man could not actually "see" the sights and sound that were being described to him he could "visualize" them as if he could "see" them. It brought him such joy and peace..
One morning the nurse came in to check on her patients and there she found the man by the window had passed away. She called the orderlies and they came to remove his friend and partner
from the room . The man was sad but knew that would be him in a short while. He requested the
Nurse to let him change to the window bed. She agreed and the orderly got the bed ready and helped the gentlemen to his new bed by the window. He was all smiles. when he looked out the window all he could see was a concrete wall! Dumbfounded he asked the nurse, he didn't understand ? All those beautiful stories about the park the kids playing, the young lovers. He was flabbergasted, he didn't understand. He asked the nurse what could have compelled his deceased roommate who had described such wonderful things outside this window. The nurse responded that the man was blind and could not even see the wall. She said " Perhaps he just wanted to encourage you! ............... There is a great moral to this story that There is tremendous happiness in making others happy, despite our own situations. Shared grief is half the sorrow, but happiness when shared , is doubled. If you want to feel rich and truly be rich count all the things you have that money can't or couldn't buy. And you have many.... " Today is the GIFT " Because
that is why it is called " THE PRESENT"