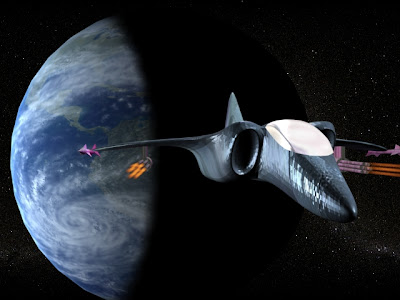 This picture was one of Daniel's first
computer generated pictures. I have this as our screen saver. As previously mentioned, Dan had a great appreciation for art and he would go to the galleries around San Francisco and view and analyze works of art. Recently, I ran across a couple of extra credit assignments for one of his art appreciation classes. Both were his critique of two paintings of artists in the 20th Century period. The first was
about the artist Maxfield Parrish's
Idiot. Maxfield Parrish did many of the covers for the Collier's Weekly
Magazine. For those of you who are not familiar with Mr. Parrish's works, I recommend that you do a little research about this famous painter and look up the Idiot painting. I'll return to the Idiot in a moment. Daniel's second critique was the Mirror by George Tooker. I also recommend research on the Mirror. Daniel's critique of the Idiot was very insightful for he felt that the title of the Idiot did not fit the painting, as the painting is of a man dressed in different cloths and is reading a book. Dan's reading of the picture was of a man, maybe even a genius, because he had found something so simple yet it makes him happy. This in consideration of the fastest period in technologically with the introduction of the airplane, automobile and with WWI in the near future, maybe society should let go of technology, politics, religion and just read a book. "Nobody has ever been killed by a book." Dan disliked violence, one year later to the month, Daniel was shot and killed while listening to Music on his way to class at the University.
Posted by dans Inspiration at 4:12 PM No comments: